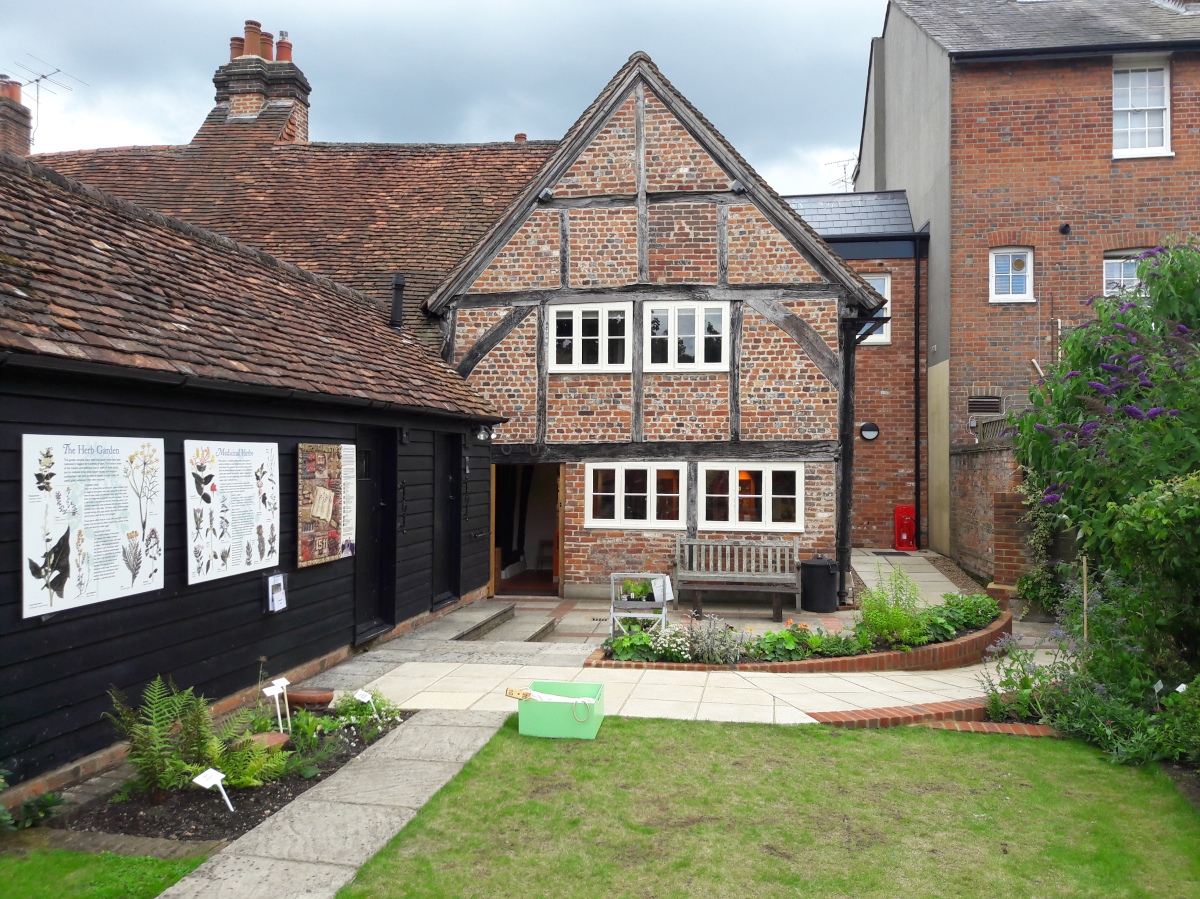 You probably know that Hugh Grant starred in Four Weddings and a Funeral (1994), a hugely successful British romantic comedy film.  If you’re a lover of movie trivia, you may know that some filming took place at the Crown in Amersham.

You’re less likely to know that the Crown could have burned down almost sixty years earlier, in 1935… until the alarmed squawking of a sulphur crested cockatoo alerted the staff, enabling them to evacuate guests and put the fire out, the only casualties being two cats.  The cockatoo lived another year, to the ripe old age of 118, before being stuffed, mounted and displayed in the hotel bar.

He now sits proudly on the first floor of the refurbished Amersham Museum, in the high street almost directly opposite the Crown.  A heroic cockatoo is only one of the various attractions in the new-look Museum, whose glass reception area with an Amersham Tube sign behind the welcome desk contrasts strikingly with the 16th century original elements of the building.  Visitors can get an overview of over 2,000 years of local history before viewing a range of exhibits and display installations. Examples include embroidered versions of the front covers of the annual leaflets which the Metropolitan Railways Country Estates used to publish to promote its housing developments along the line, and products manufactured at Goya’s perfume and cosmetics factory.  The museum’s garden (pictured) now has access for wheelchair users and features new planting. All in all, it’s an excellent way to find out more about the town – or, if you have lived or worked there, to take a nostalgic trip into its past. 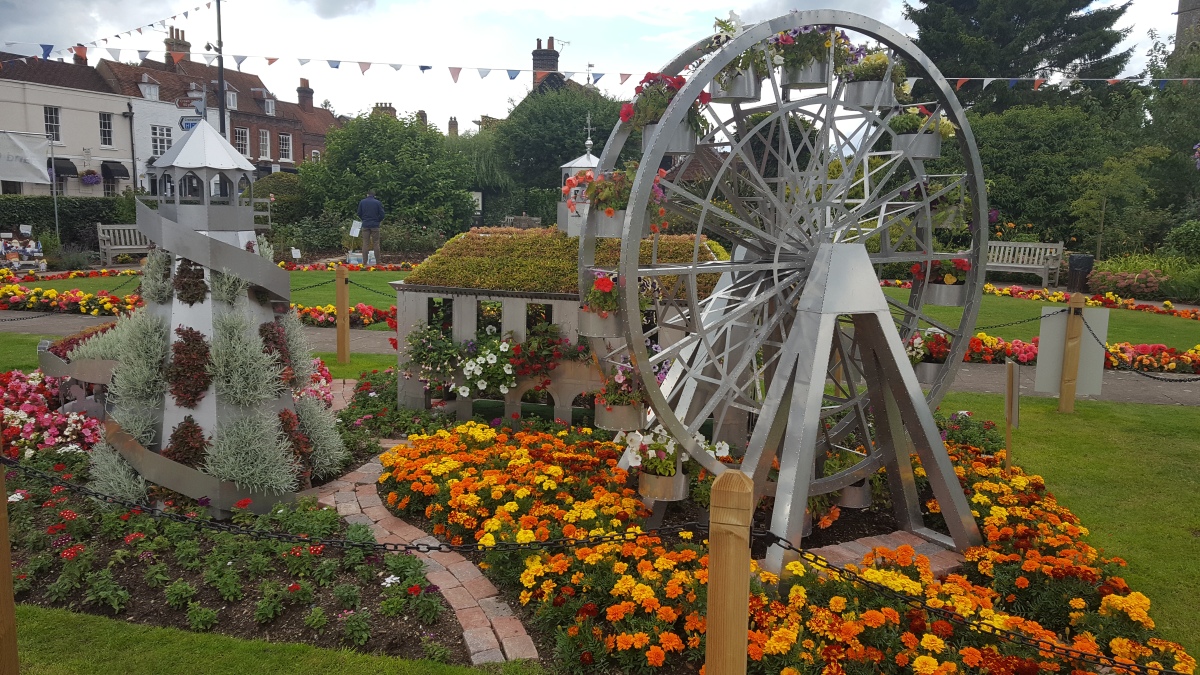 Combining the traditions of 1066 and all that with our modern predilection for lists, we can probably guess that King John was a Bad King and near the top of any Top 10 Worst British/English Kings in History, in most people’s eyes.  But one corner of the Chilterns has reason to be grateful to him.

For it was John, in 1200 at the request of Geoffrey, earl of Essex, who granted the right for Amersham to hold a weekly market and an annual fair.  The weekly market enabled locals to stock up on the basics they needed for everyday living.  The annual fair saw merchants from further across England, and sometimes beyond, offer more exotic wares such as perfumes, handicraft, furs and the types of fruit which might not be available all the time (such as oranges).

If you wander into Amersham’s Garden of Remembrance, you can find a splendid reminder of this in the form of a floral tribute to 800 years of Amersham history: a joint venture by Amersham Town Council, Chesham Bois boy scouts and other volunteers.  The building depicted in flowers in the photo  is the Market Hall, built in 1682 and now Grade II listed.  The Ferris wheel is a reminder of the more light-hearted aspects of the annual event – all the fun of the fair! 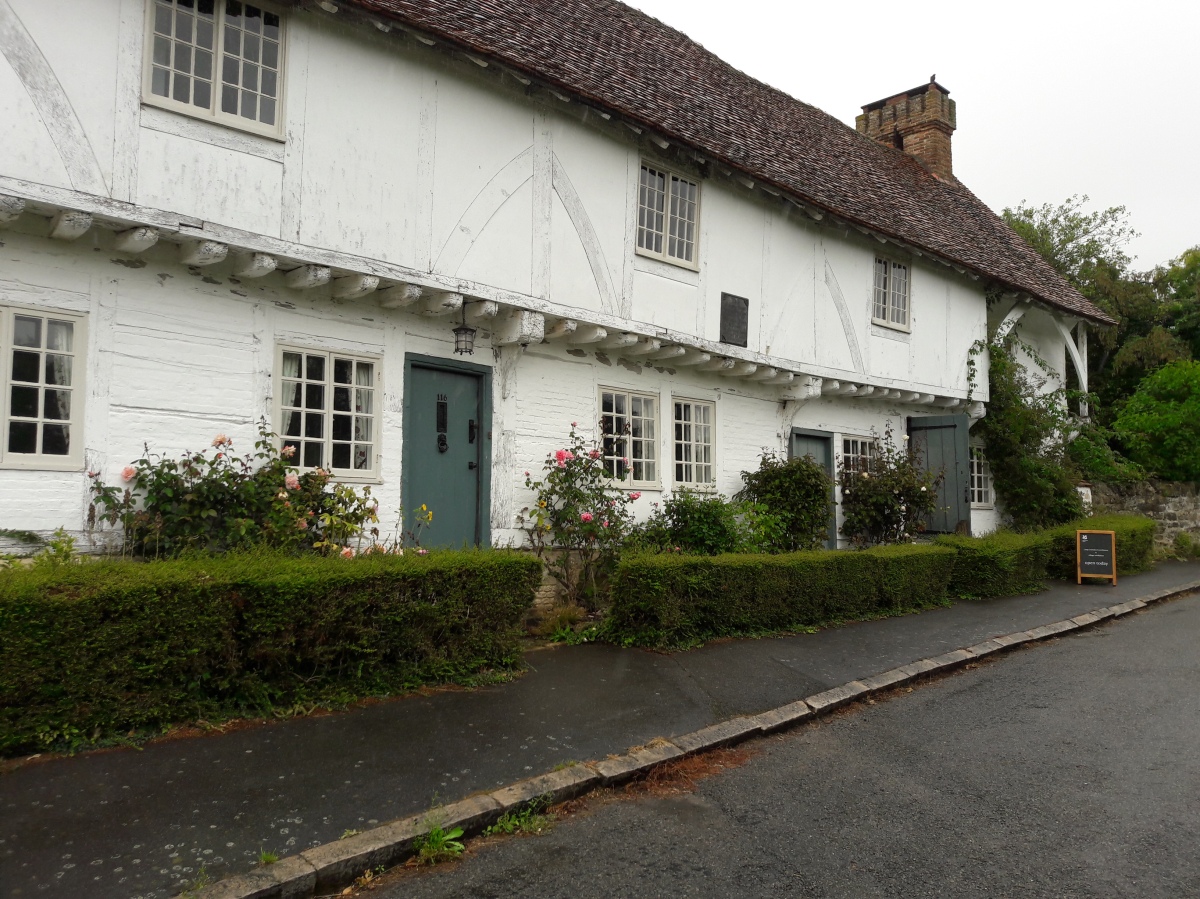 There’s a travel syndrome we might call New York State of Mind: the belief that you’ve been somewhere, even when you haven’t.  We’ve all seen New York in the movies, so we feel we know it.

If it has nothing else in common with New York, maybe Long Crendon has that.  Even on a dull, drizzly day, it’s impossible not to appreciate the weight of history, as you finish your coffee in The Flowerpot café, avoid tripping over someone else’s small dog and make your way down the High Street towards the old Court House (pictured here) and the Church.  So many properties are Grade II listed that it’s like an English Heritage showroom; 99 houses built from witchert (puddled clay, straw and dung), stone, timber or brick, from anywhere between the 14th and 19th centuries, as well as several listed barns and walls and a telephone booth from 1935.

But the real reason for any deja vu you may feel is possibly more prosaic. I have a vivid memory of turning on the TV in our hotel room in Bucharest on New Year’s Day 2008. It wasn’t quite “57 channels and nothing on”, but there appeared to be only two things on. One was the video of Kylie Minogue’s latest single; the other was Midsomer Murders which has now been on our TV screens, and millions of others worldwide, for 20 years. And Long Crendon has played a starring role on many occasions.  The Court House doubled as a bookshop in ‘The Dagger Club.’  Different houses on the High Street have appeared in the episodes ‘Garden of Death’, ‘Tainted Fruit’, ‘The House in the Woods’, ‘Blood Wedding’ and ‘Blood on the Saddle’.  The Eight Bells pub, which was featured in ‘A Tale of Two Hamlets’, ‘Blood Wedding’ and  ‘The Oblong Club’, has a signed photo of John Nettles, who played the first Chief Inspector Barnaby, near the entrance.

There weren’t, we have to say, that many people around on the day we visited. It may have been the bad weather, of course. Or perhaps they’ve all been murdered…? 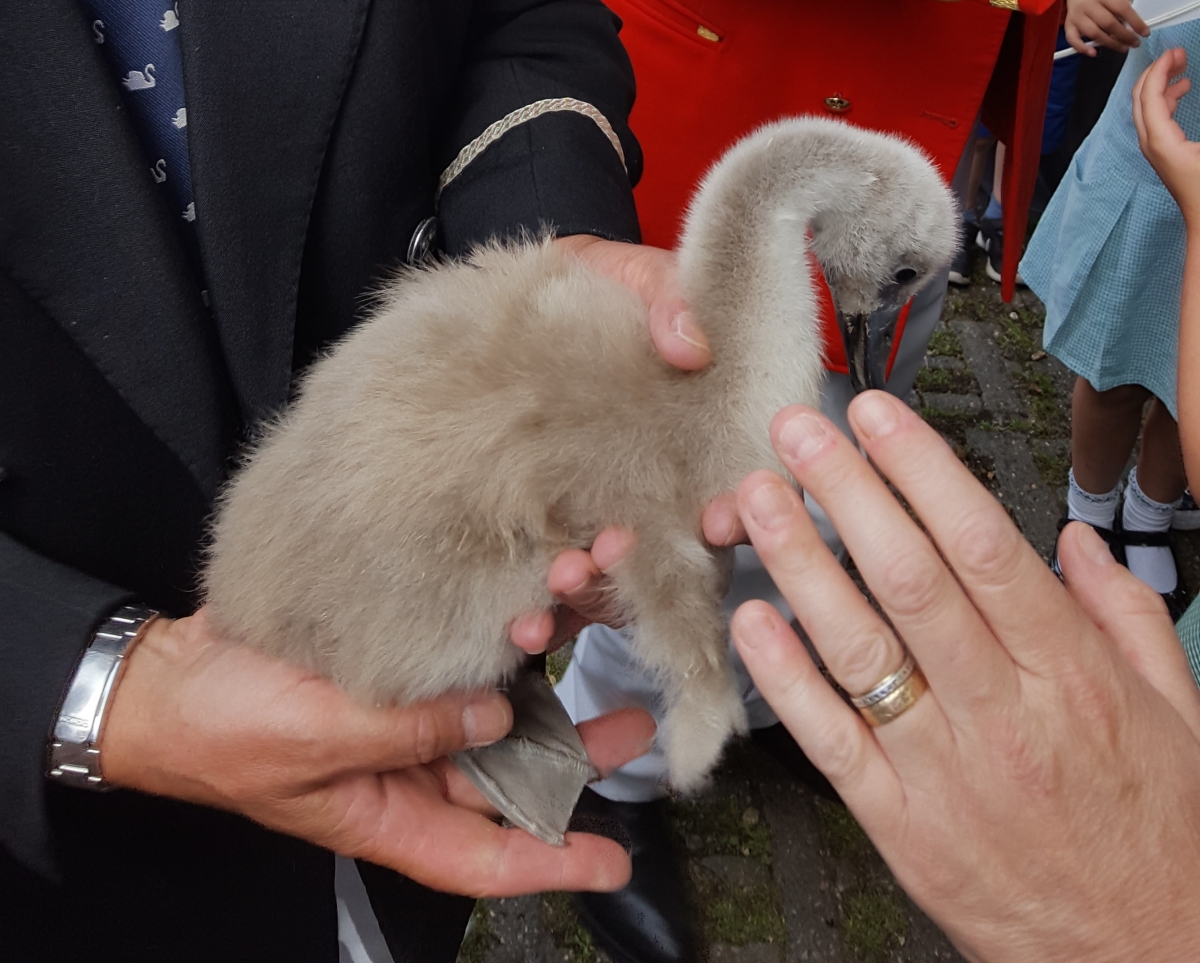 Its origins go back many centuries, perhaps as far as the 12th century when the mute swan gained Royal status meaning that, if a privately owned swan escaped, it became the property of the Crown.  (That might have made the swan-escape sequence in Hot Fuzz even funnier if the Queen had turned up…)  By 1378 there was an official post of Keeper of the King’s Swans and the unfortunate bird was known for a long time as a culinary delicacy.

The process of swan upping on the Thames involves identifying swans and their cygnets, weighing them and checking their health.  It now takes place during the third week of July each year. The Royal Swan Uppers, who wear the scarlet uniform of Her Majesty The Queen, travel in traditional rowing skiffs together with Swan Uppers from the Vintners’ and Dyers’ livery companies (now the only owners of private swans on the Thames).  Nowadays the emphasis is heavily on education.  The Swan Uppers make over a dozen stops over the course of four days, starting at Romney Lock, the nearest lock to Windsor Castle, and finishing at Moulsford.  A number of these stops involve meeting local schoolchildren and briefing them on the work of the Swan Uppers – and, of course, offering the opportunity to get up close and fluffy with a cygnet or two… 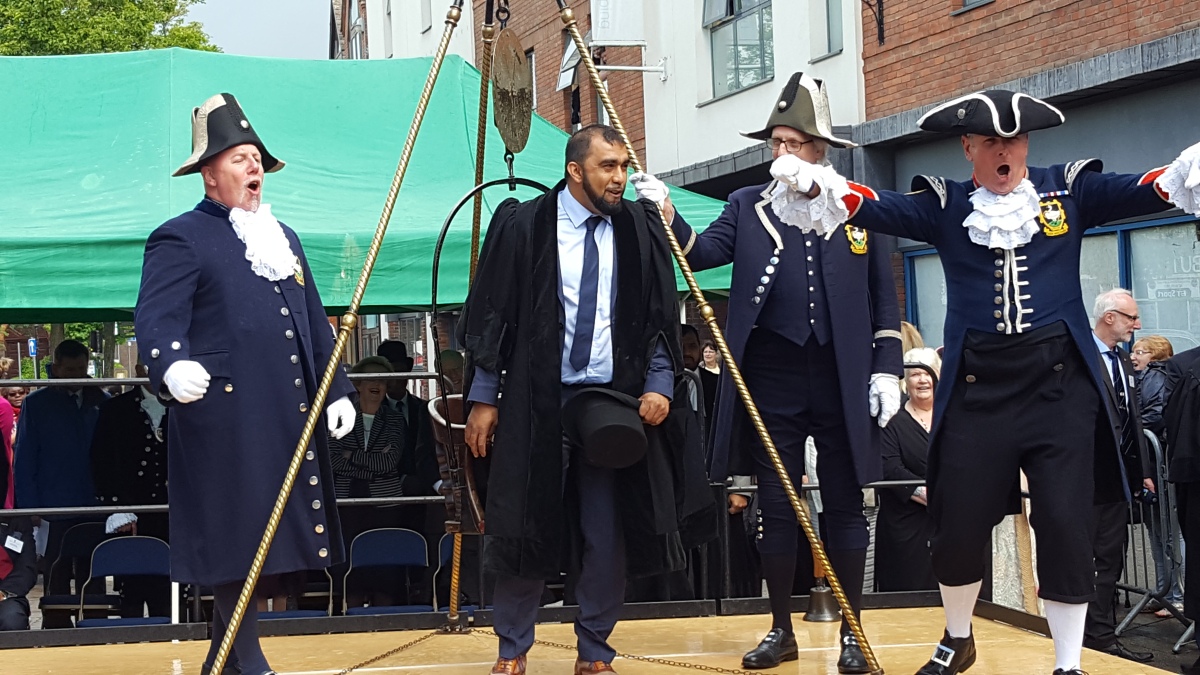 Every third Saturday in May, the Mayor of High Wycombe and its Charter Trustees – councillors for the town wards of Wycombe – subject themselves to a public weighing.  The town crier presides as officials compare the Mayor’s and councillors’ weights with the equivalent figures from a year ago.  If they have not gained weight, the cry is “No More!”; if they have put on weight, “And some More!”  The theory is that gaining weight has occurred as a result of the fruits of office…

This year the Mayor and most councillors managed to achieve a cry of “No More!” But a few did not, provoking good-natured ritual booing.  One unfortunate even received the damning verdict: “And a LOT, LOT more!”

It could be worse.  In years gone by, the story has it, the crowds would throw tomatoes and rotten fruit at those who had put on weight…