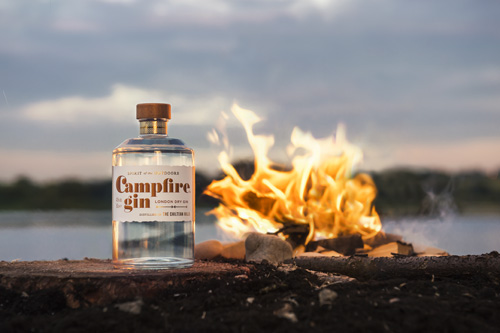 One of the many pleasures of our research has been finding local producers who are bringing new food and drink tastes to the region.  Ben and Kate Marston are great examples.  A marketing expert and a graphic designer by trade, the couple have combined their love of food and drink, travel, adventure and the great outdoors to set up the first gin distillery in the Chilterns – and the evocatively named Campfire Gin brand.

“Campfire Gin is produced in small batches,” Ben and Kate explain. “Ten carefully selected botanicals, including sweet, fresh orange, rooibos, hazelnut and piney juniper are distilled with the finest UK wheat spirit. The result is a gin that leads with a citrus nose and juniper palate, has a rich middle and sweet end that builds, sip after sip after sip.”

The distillery, named after a rare local rock formation, houses a 50 litre still called Isabella and a 200 litre still called Amelia, named in turn after two great female adventurers, Isabella Lucy Bird and Amelia Earhart.  Based on the P E Mead & Sons Farm Shop site adjacent to Wilstone Reservoir near Tring, Puddingstone offers tours on Thursday nights – which invariably sell out fast – as well as selling in local bars and restaurants and online).  The team has won numerous awards, including Navy Gin of the Year for Campfire Navy Strength – one of three core gins along with London Dry and Cask Aged.  There’s even a summer special produced in collaboration with the Herts and Middlesex Wildlife Trust.  We tried Campfire inside rather than outside, but it’s an excellent way to make up for a trying day – or to add something special to that evening under the stars.

Bradt Travel Guides now publishes over 200 titles, including full-country travel guides, regional guides, wildlife guides, and works of travel literature. Bradt pioneers unusual travel destinations, champions sustainable tourism and promotes high quality travel writing. Its Slow Travel guides to special areas of Britain, written by local authors, reveal the spots that aren’t normally publicised and give a voice to the locals. They help you to find out where the best food can be enjoyed (and from where it’s sourced), indulge in a little cultural foraging and discover the Britain you never knew existed. Find out more at www.bradtguides.com.