One of the most distinctive sights of High Wycombe lies just outside the town. As you turn right at the roundabout, passing the Eden Centre, Marks and Spencer and a new Aldi, and drive west along the A40, a golden ball appears on the hills ahead.

This marks the Dashwood Mausoleum and the Church of St Lawrence, part of the legacy of Sir Francis Dashwood (1708-81), a successful politician with a taste for Classical history and architecture. The design of the mausoleum and church are said to have been inspired by buildings in Rome and Venice, and they’re well worth a look.

But that’s for another day. On a gloriously sunny and still Sunday morning in February, once you’ve passed through the charming 16th-century village of West Wycombe and parked at the end of the high street (taking care on a very uneven surface), it’s time to walk through the gates of West Wycombe Park. The grounds are usually closed until April, and the house till June. Today’s an exception, as Snowdrop Sunday, with proceeds in aid of the South Bucks Hospice at nearby Butterfly House.

Snowdrops are everywhere, of course; a welcome promise that the worst of winter is over (we hope) and spring is round the corner. But there are few better places to enjoy them than the grounds of West Wycombe Park, as you admire the main house (pictured below), a mother hen to a brood of eccentric, ornamental constructions such as the Music Temple, sitting splendidly on the middle of a small island as coots and swan squabble in the lake. Each time you turn a corner, you find a better view than the one you just photographed – and with all the buildings in that distinctively Dashwood yellow. 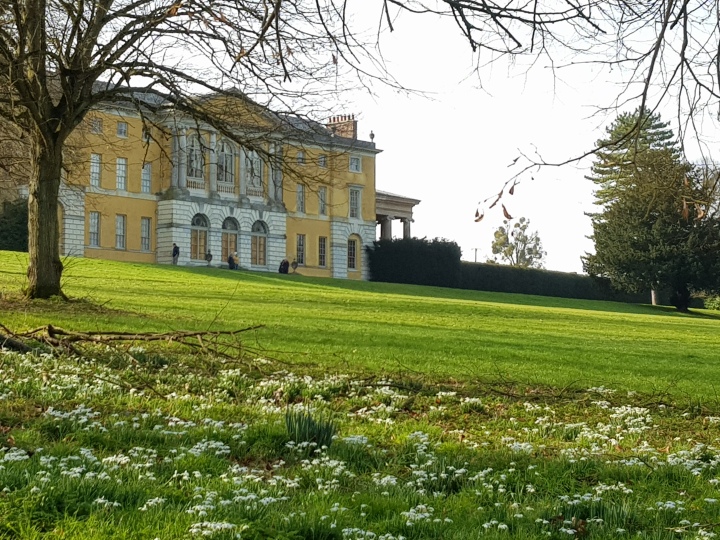